From Survived By Wiki
Jump to: navigation, search 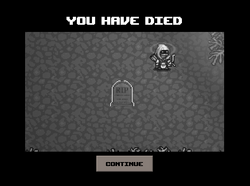 Death is part of Survived By's gameplay core. Death is permanent, which means that once a character dies, it stays dead. This includes the loss of every single item in said character's inventory, including the equipment currently in use, as well as all relics consumed. The only exceptions to this rule are

Electrum, as they are account-bound.

When a character dies, the player will be moved to the legacy screen, where they are able to choose any equipment to inherit to their next character, as well as managing Ancestral Legacies which the player can spend their earned

Dying will cause the World Tree to weep, causing earthquake across the world which increases in severity depending on how powerful the character is. This means that if there is a massive earthquake, it is likely that a well geared and leveled character had died.

A tombstone will appear at the location where the character died, which other players can pay their respects to.

The player will be faced with the equipment screen, where they can see all of the gears (weapons and armor) the character had at the moment of death. They can either sacrifice the equipment for additional Valrs or choose to inherit one of their gears to their next character. Any subsequent equipment players would like to inherit will cost Electrums which scales according to the item tier.

A screen recapitulating all the Valr the character has accumulated throughout their lifetime will appear on the screen. The level of the characters, the gears sacrificed, the challenges completed and the Wraiths killed will contribute towards the overall Valrs accumulated.

The player will then arrive at their legacy screen, where they can spend their earned Valr to either upgrade or buy new Legacies. There are three types of legacies available:

Additionally, players may earn free Legacies by completing Achievements with their account. These are account-bound, which means that a player may only obtain one legacy per achievement.

Any unspent Valr will be lost once the player quits the screen.